The purpose of these tests was to see if any of the existing Bottisham 802.11 transmissions were detectable in Little Wilbraham (in particular, 39 HIgh Street where I live!). Although not exactly portable, the Spectrum Analyser that was used could be powered from the car, and a 12dBi gain antenna was used to give a reasonable indication of direction of received signals. Vehicle measurements, where relevent, were made with this antenna pointing through the driver side door window, so the height would be about 1.5m above ground.

Unfortunately, no signals could be detected at 39 High Street (other than numerous microwave ovens, which share this same band...[the ISM (Industrial, Scientific and Medical) allocation of 2400 - 2480MHz]. In view of this, the next step was to confirm that there were signals actually managing to escape from Bottisham in our direction. Visual surveying with binocculars from the public footpath running from the playing field to the back of the Hole-in-the-wall PH, showed that although the land between the two villages is clear, there is extensive tree cover at the Bottisham end. An easy place to park the car is at the end of the old airfeld perimeter road, as it joins Little Wilbraham Road a few hundred yards up from the Primrose Road junction - see below.

The signal level above is promising. Looking at the view back towards Little Wilbraham, you can see (with a little difficulty) that a number of houses are unobstructed. Virtually all of them are on the North side of the High Street, with at least 3 or 4 of the houses in Manor Close having very good positions. Additionally, Nos 38 and 40 High Street have clear take outlooks (at chimney level, anyway). Unfortunately, these houses obstruct the path to No 39!.

Properties on the South side of the High Street also have to contend with a pronounced falling away of the land height. My property also happens to be a bungalow, so it would take a mast/pole of about 6m length (even if mounted at chimney height) to get above the shaddowed region. This is sad - I would have liked to have hosted an Access point!

These show the 12dBi gain antenna mounted atop a 2.5m mast attached to the chimney, resulting in the expected no signal, and a close up of the antenna itself. 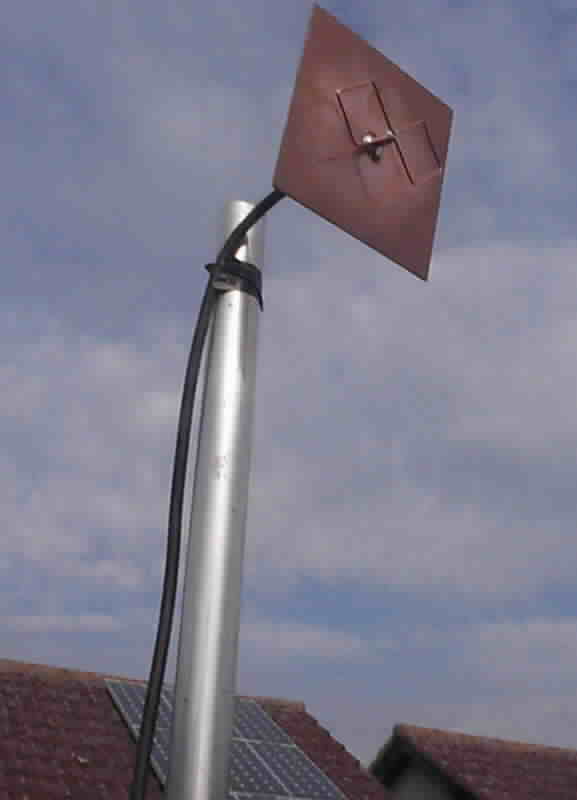 The Spectrum analyser had a noise figure of about 3dB, and the antenna feed loss would be between 1 and 2dB

During a run to Bottisham and back, I noticed that the first houses on the (eventually) South side of the High Street, as you come into Little Wilbraham from Primrose Road (ie, opposite the Hole in the Wall PH) were quite well sited. Also, the Access point at Crown House, Bottisham is virtually the last property of the village, with sweeping views of the A14 (OK, Little Wilbraham as well). This looked line of sight to me - and I knew that one of those houses was owned by someone who had shown interest in Broadband. This looked very promising.....

Parking the car at the Primrose Road crossroad, I put the antenna on the car roof and pointed it at Crown House. Sure enough, a good signal (again about 15dB above noise was seen). As can be seen below, both properties appear to be visible:

This is very encouraging, especially as the Crown House higher gain antenna is pointing away from us.

Views taken on the line-of-sight path - this is about 200m down on the Six Mile Bottom side of the crossroads.The two shots were taken from within the car. On the Lt Wilbraham side, the houses are clearly seen (even on these poor quality shots), but it requires a pair of binocculars on the Bottisham side to see that actually the two antennas on Crown House are visible from this point.

Signal level is just the same here as previously.

This path also has the advantage that there are no trees to be seen in the way, so no potential problems with leafage later on in the year.

A Desktop PC, fitted with PCMCIA slot and Wireless card, was loaded into the car together with a monitor (yes, a laptop would have been somewhat easier!) and the car driven to the same location above. The wireless card/software was a Zoom Air model 4105, and this was set to scan for networks whilst the antenna was once more pointed towards Crown House. The following two SSIDs were decoded:

Attenuation was added into the antenna lead and the network re-scanned until the stronger of the two signals (CRNE006-INVISIBLE-NETWORKS-6) was no longer registered by the software. It required 6dB of attenuation to reach this condition. Considering that the
high gain antenna that IN use has a gain figure of 24dBi, ie 12dB more than the one used in these tests, a signal margin of 18dB exists over this path

['dB's are power ratios expressed logarithmically. So 18dB is a linear ratio of just over x 50 ]