This system was instigated by seeing one of the NEFs (National Energy Foundation) impressive Selfsol stainless steel enclosed solar panels. These were designed for DIY construction and the Foundation have organised several group sessions to enable a cost saving to be made by moderate bulk purchase of the component parts (I joined one of these near Cambridge - see Nicks excellent write up of this event).

The pics below show how the 3 panels, each about 1 square metre in area, were mounted: 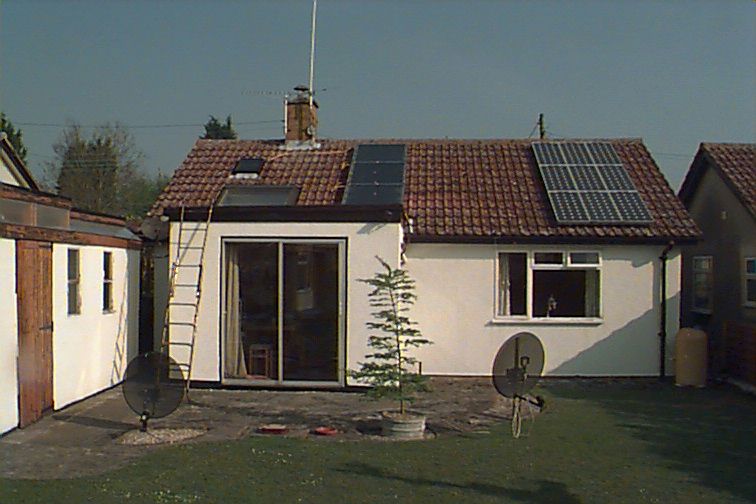 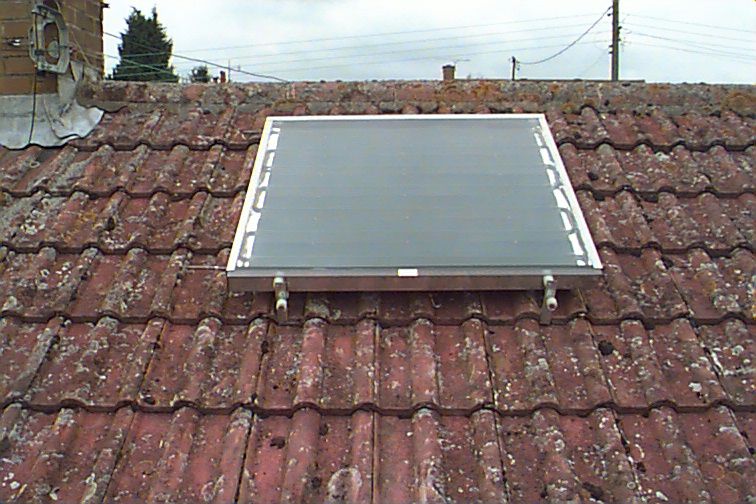 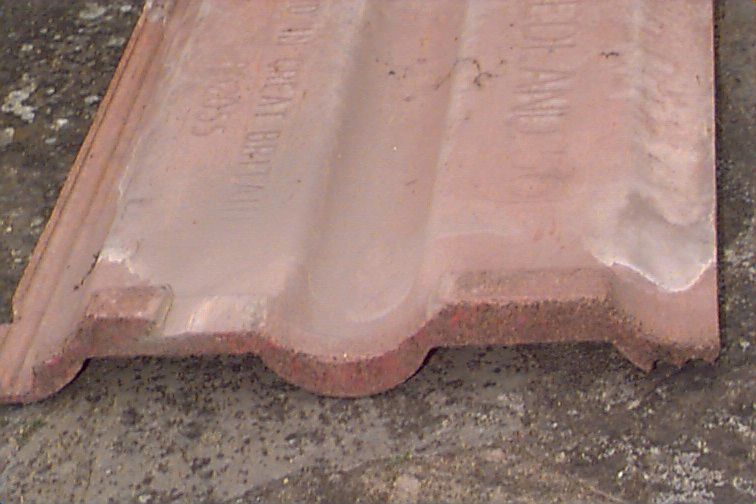 Roofing angle irons are used to hold the panels. They actually sit on M10 bolts fitted with polythene sleeves as shown in the centre pic. An angle grinder was used to remove part of the tile (Redpath 50) to avoid it being lifted by the angle iron.

A PIC based controller would have been nice, but to get something working quickly, the following was put together. It relies on NTC thermistors as the sensing elements, and one is fitted to each panel (if only to allow remote monitoring) as well as one at the coil exit on the hot water tank. 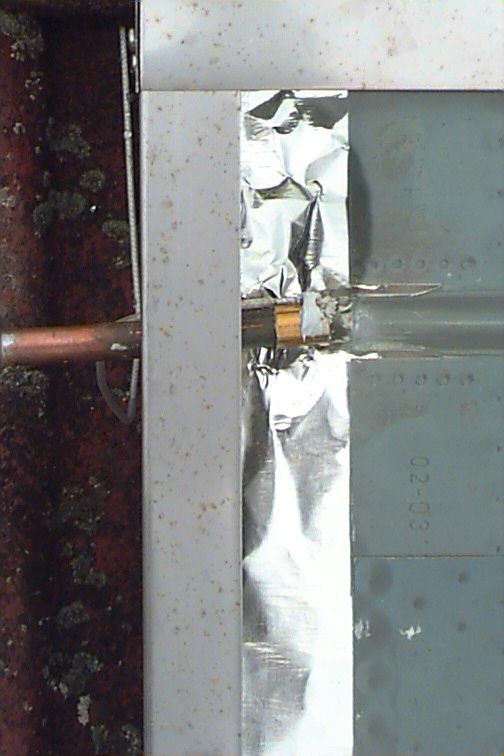 A clip was made to secure the temperature sensing thermistor to the panel (see pic above). This was actually a half inch length of 10mm brass tube, cut along its length so as to slide over the collector outlet.PTFE coac was used as the connecting lead - this allows the outer to be soldered directly to the clip. Since the thermistor is a surface mount item (Farnell part 732-163), it actually has very little thermal mass, and heat transfers to it simply by virtue of one end being soldered to the clip. A piece of kapton tape was also slid under the body to ensure isolation of the live end. The whole assembly was then brushed with heat sink compound (which is why you can't see much detail on the pic...). Interconnection to the inner of the coax was via a 5mm length of 0.1mm enamelled copper to ensure there is no mechanical strain on the smd thermistor. 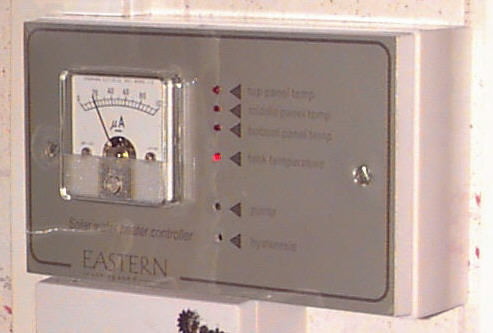 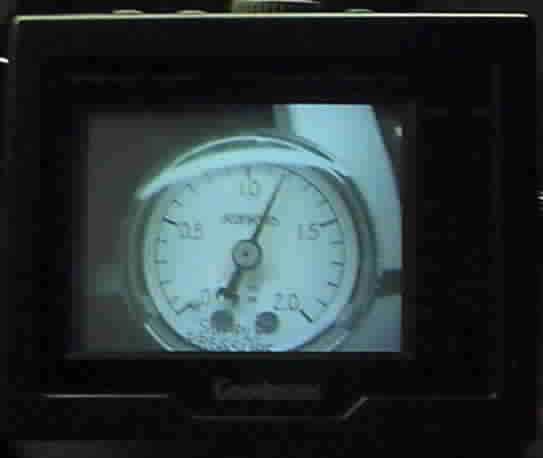 CCTV'ing the pressure gauge is probably a little OTT...

A check valve was required to prevent reverse thermosyphoning of the tank hot water back up to the panels!

Initially the pressure was set at 1 Bar. It was interesting to see the rise and fall (of pressure with collector temperature. 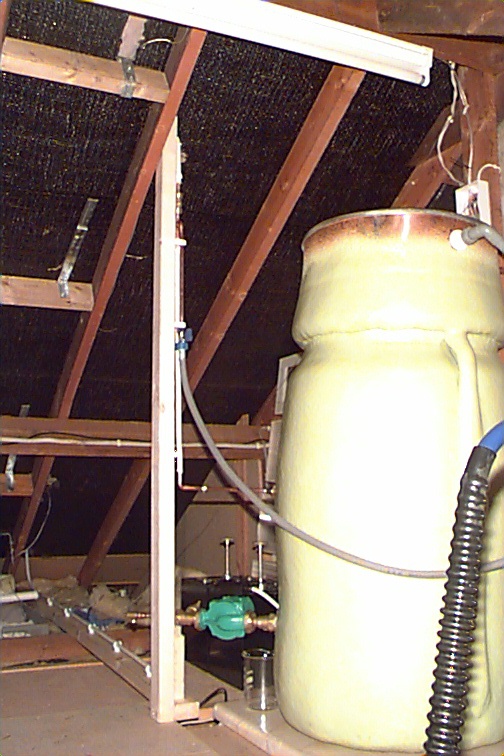 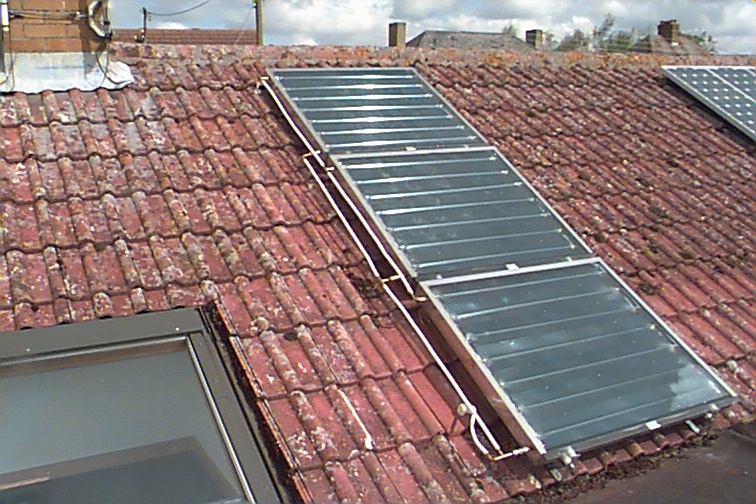 The system has now been working about 14months (it is June 2003 as this is written), and it is working very well. On only 5 days during the first 4 months did the immersion heater have to be switched on. These days were very dull, and it has surprised me that quite an overcast day will still produce adequately warm water.

On a cloudless day the tank reaches 90 degrees C! - positively dangerous for anyone not aware. Since the tank coil outlet (see position of pump in the pic above) is only about 20% up from the bottom of the tank, pretty much all of the contents settle at an even temperature, if no water is drawn off.

I now have to be honest and admit that for the first year, no pressure vessel was fitted (it was on order, but never arrived). A cautious eye was kept on the pressure gauge during the year, but the range was never greater tha 2:1. In view of this, my feeling was that although something ought to be fitted, a simple arrangement ought to suffice - and this is what has been added: 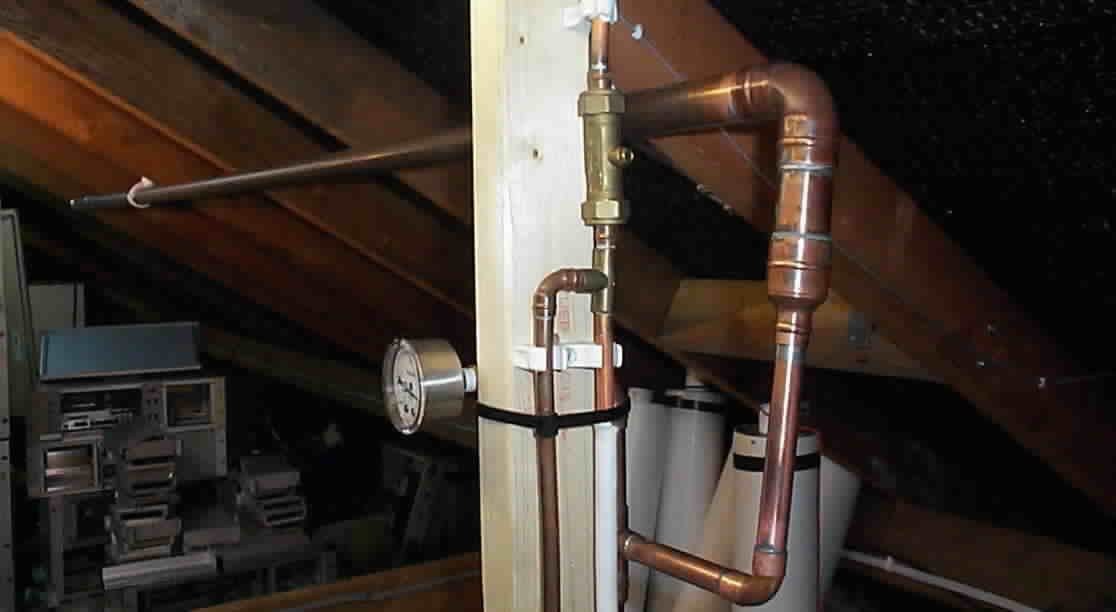 This is nothing more than a 2m length of 28mm tubing, capped off at the far end, and connected in so that the air trapped in it during installation cannot escape. As the system is pressurised, water compresses the trapped air, forcing it part way along the tubing. The pressure change over a day/month is reduced to some 30%, with this arrangement.

Although I did buy some antifreeze at the original instal date, a slight leak at the tank interface, coupled with the high cost the stuff, meant that it was not initially added. Prior to winter, the system was (I thought) fully drained down - but come the new year, one of the pipes in the lower panel burst. Well, I asked for trouble I suppose. Here are a pair of pics of the initial burst pipe and the repair that carried out on it (by way of a warning to others!)

Of-course, I have also sorted out the tank interface leak...

A very worth while project, which I would recommend to everyone.