Satellite LNBs are now available on the surplus market at rediculously low prices, and the current change over from analogue to digital services has added even further to this situation (the local Cambridge refuse tip will sell a 60cm dish plus LNB for BP 10.00). Not only is this useful for component stripping, but also most LNBs are easily modified to provide:

The first 3 items are particularly useful in putting together an 11GHz interferomer of good performance (ie, a noise figure less than 1dB).

By 'easily modified', I mean simply drilling a hole in the pcb track at a suitable point (drilling through the aluminium housing as well), and soldering an SMA connector direct to the pcb (which unless you're very unlucky will have a groundplane as the reverse side), cutting the track to the following unwanted circuitry, and opening up the hole also drilled through the aluminium housing so that the SMA connector can protrude out of the unit and be accessed. Many UK LNBs have housings that are essentially flat at the back, though you need to check first that the SMA connector will be clear of obstructions - even with these, a hacksaw and file can usually resolve the problem!

Most LNBs are as below - the older ones may have more stages and an active rather than diode mixer, but the block diagram shown should still be quite representative of what is currently around. 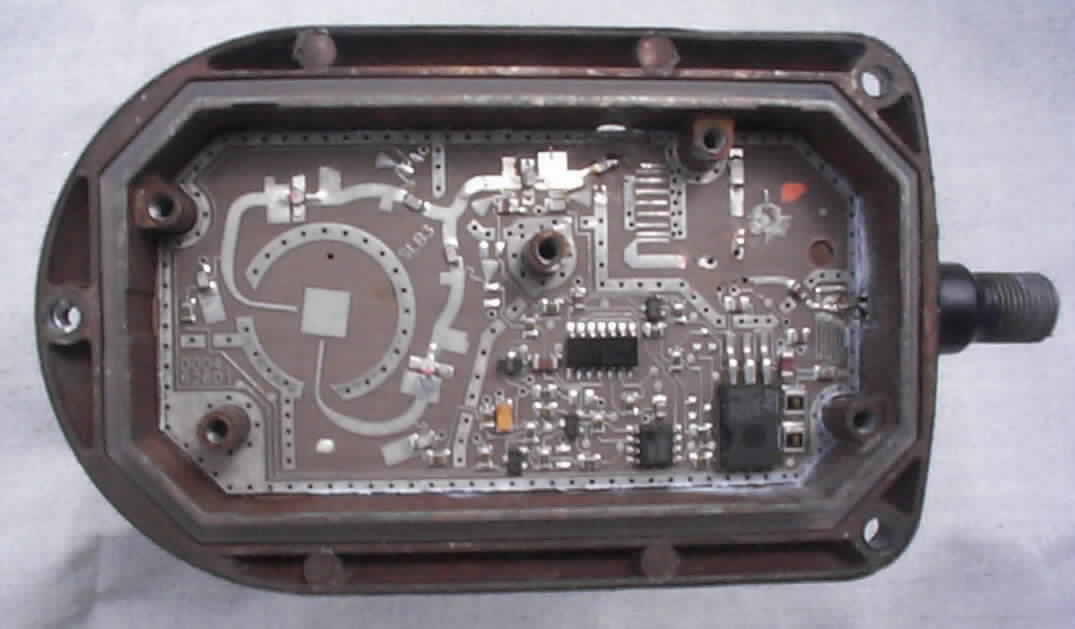 The two antennas can be seen clearly on the LH side of the pcb. Each has its own amplifier associated with it (switched by sensing the 13v or 15v supply). Where the two amplifier outputs combine you can see closeby the common second amplifier stage. Following this as it outputs horizontally towards the bandpass filter (the arrangement of nine horizontal fingers) you can see that the track has been cut and less obvious, the inner pin of the SMA connector (fitted from the reverse side) soldered to the right of the chip capacitor (2p2 value), which was added as a dc blocking component.

As a matter of interest, this LNB sample had an active mixer - these combine the local oscillator and mixer circuitry. The five mounting holes where it was fitted can be seen directly under and to the right of the bandpass filter. As is shown in the LH pic below, the SMA connector body is simply sweated to the groundplane reverse side of the pcb. When reassembled, the connector pokes through the drilled out housing, as also shown. 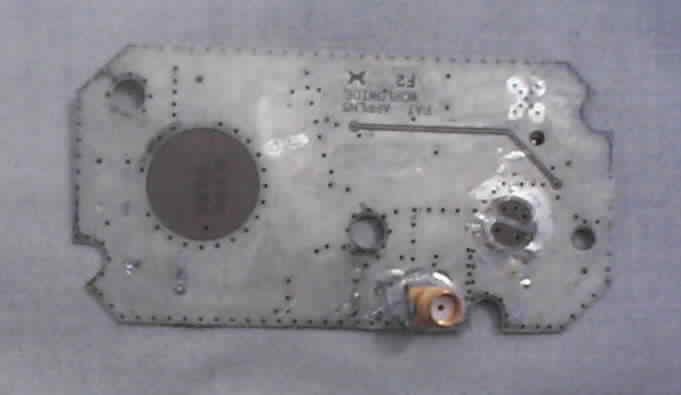 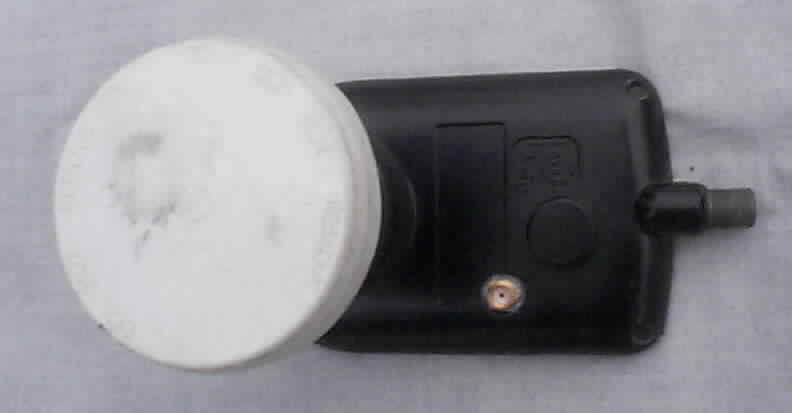 Connecting up the two Antennas

Using 1m long coax tails from the two head pre-amp outputs, and joining at a straightforward SMA tee piece is acceptable practice. At first thought, the result is a 2:1 impedance mismatch (true enough) problem, but given the 4dB/metre coax loss, this mismatch pretty much dissapears after the 1m length of signal flow. For the receiver proper (see later) to also see a 50 ohm source, it follows that the connection from the tee to the receiver should also be via another 1m length of RG223.

With 1m long tails, the antennas can comfortably be spaced by about 1.5m, with corresponds to 57 wavelengths or so at 11GHz.

Jenny has calculated (and verified in practice) the following interference pattern to be expected at spacings of 27 and 57 wavelengths:

Back to the interconnection..

A third, almost unmodified LNB is used after the tee piece to convert the signals to an IF frequency of 1 - 2GHz, just as it would normally be used in satellite TV mode. The one modification required is to disconnect the integral antenna, and replace it with yet another SMA connector so as to mate up with the tee piece coax tail. Be more selective about this LNB - it is not easy to add an SMA connector to the sort of unit that was used in the previous section (ie, one that has a printed antenna on the pcb). Much more suitable is the type that have a probe extending from the pcb into the actual (circular) waveguide section of the aluminium housing. The 'Cambridge' type LNBs are like this. The down side is that you will have to do some hacksawing and filing to gain access to where the connector will be located. It doesn't matter wether you choose the 'horizontal' or 'verticle' probe, as long as you apply the correct DC voltage to the LNB!

The LH pic below shows a modified 'Cambridge'. Looking at the lower left, you can see the input connector, and above it and to the left again is a hole showing the input point to the other polarity input (drilled in error..). The unpainted area of the housing is where the circular waveguide section used to be.

This particular LNB also had an SMA connector fitted to the pre-amp output, resulting in a cheap but low noise 20dB broadband 10 - 12GHz amplifier module (sorry - I couldn't find the totally correct pic to suit the text). The unmodied 'F' connector on the RH side is used to feed +12v to the unit.

With more effort (and much more care, given the frequency of operation), an LNB of the sort shown below right can be modified also. In this case the SMA connector is a bulkhead type, and semi-rigid coax interconnects this to the pcb. (Very) careful triming of the semi-rigid is necessary so that the inner pushes through the pcb hole (just as the SMA connector did) and the outer is then soldered all the way round to the earthplane. The cable must approach the board tangentially (ie, not layed flat against the board, with the inner bent through 90 degrees). A plate was made up that fitted over the waveguide opening, and this what the SMA bulkhead is attached to.