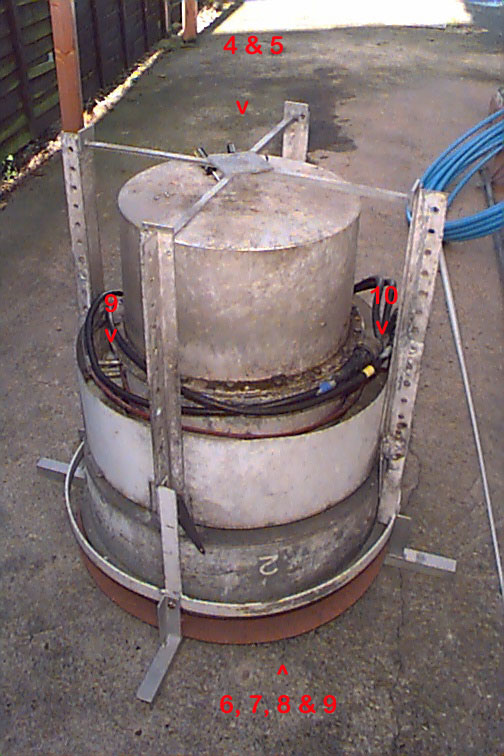 This particular focus box houses a 1420MHz antenna, nested within one for 408MHz, these being located at the lower end of the structure shown (ie, shown by views 6 and 7). The large top canister houses all remaining electronics (see views 4 and 5). Four vertical angle irons are used to mount the assembly to the dish arms. An motor housed within the top canister was used to rotate the antenna mount.

There is some bad corrosion in places, but this has only affected the rotating system, which is beyond repair. An aluminium girdle plate (views 9 and 10), though 6mm thick, has been completely eaten away in places (as has the [aluminium]

gear drum). There has been no breach of the top canister, and all the electronics is in excellent condition. Although there are two tears in the thin radome material (pics 6 and 7), the only corrosion within the antenna drum (view 8) is some minor pitting of the drum lip - everywhere else is surprisingly bright. 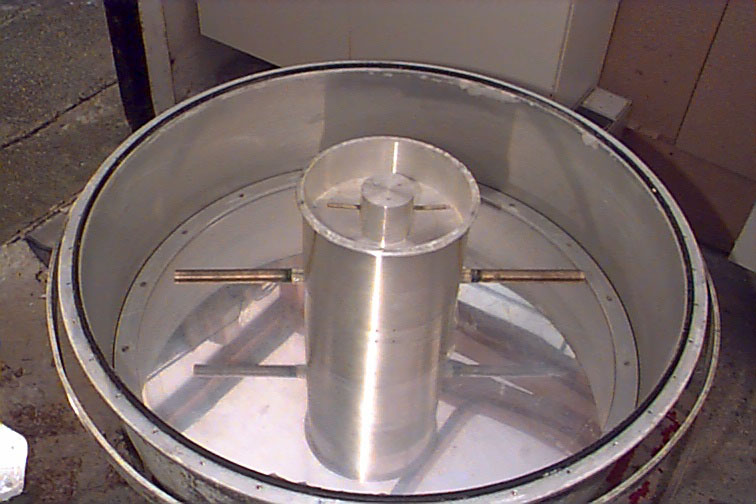 See also dimentioned drawing of this on jenny's page. Each arm of the (both 408 and 1420MHz) antenna is connected to the other via a half-wave section, with the 'N' type feed connector feeding one arm via a quarterwave section (see close-up

pic of 408MHz antenna). The phasing sections are fabricated within a slot milled into the supporting drum mount.

This has two 3 element interdigital filters - the larger of the two connected directly to the antenna feed. The response of this larger filter is shown below

The second filter has a much sharper

response, with greater out of band attenuation, which is at the expense of in band loss (1.5dB).

Between the two filters should be the front end pre-amp, but this is missing. However, there is a 10dB broad band amp fitted after the second filter.

To provide circular polarisation, a further pair of probes were added at right angles to the existing pair. In fact, the 'existing' pair had to be replaced because the feed arrangement (fabricated line within the boss) would have mechanically prevented the second pair from being fitted. For a similar reason, the feed was changed to semi-rigid coax.(see

proposal). The original probes, and their position within the drum, seem to have been designed to present a nominal 100 ohm - much simplifying the feed arrangement. 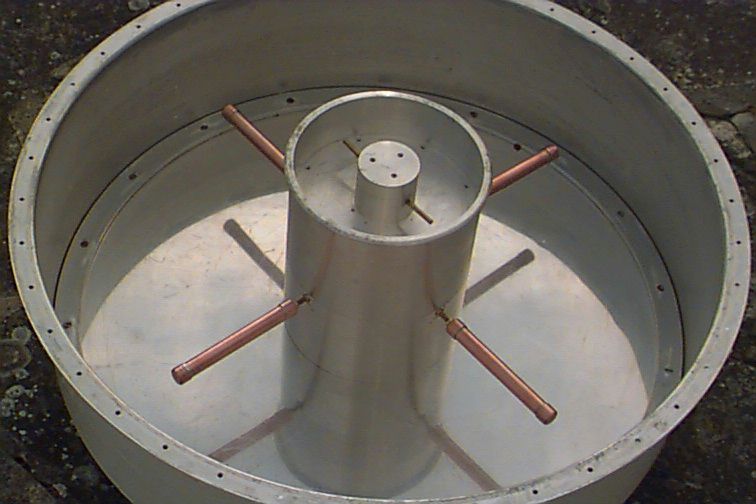 The replacement probes screw onto 40mm lengths of M5 studding, so they can be easily changed and also the overall probe length adjusted to optimise the return loss, though this is excellent over quite a bandwidth, as the following plot shows: 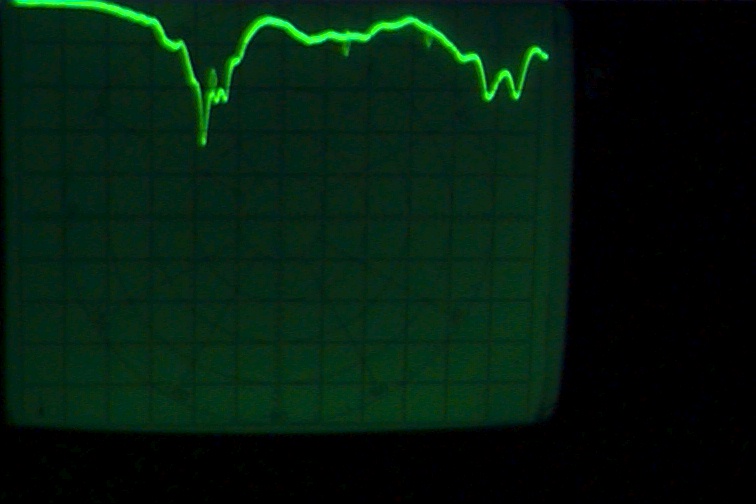 This shows a marker at 480MHz (20dB return-loss limits are 430 and 515MHz). A little more work is required to extend the lower end down to include 408MHz. 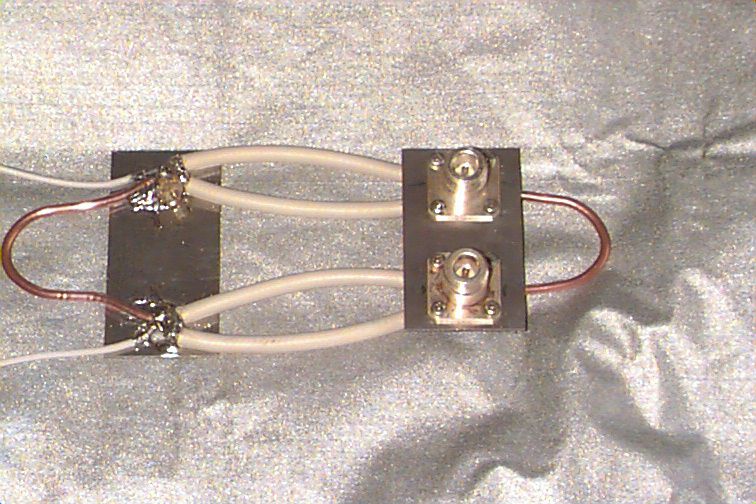 The two thin white coax cables in the photo were test connection leads – in practice, these would be the two feeds from the antenna. Each leg is an electrical quarter wave long. The end semi-rigid sections are 50 ohm RG402, and the central paralled (white) flexibles are 75 ohm double screened RG? [paralleled to synthesise a single 37.5 ohm section]. The response looks a little ‘average’, really.

For more information on quadrature hybrids, try this excellent

HEMT (High Electron Mobility Transistor) devices are capable of very low (0.3dB) noise figures and high gain. The satellite TV market has ensured high volume production of low noise devices for use 11GHz, and these types have even lower noise figures at 408 and 1420MHz.

Several amplifiers where built to the DJ9BV design – and were built on pcbs obtained from the originator. These are fixed tuned, but it is claimed that without adjustment, a NF of 0.5dB should be obtained. Using the HP8970B noise figure meter at Simoco, we only measured 0.6/0.7dB after adjustment. However Mike Croft at the Cavendish was kind enough to measure these same amplifiers, and they measured 0.5dB .

An early 433MHz pair of fixed tuned preamps that I put together only achieved 2.5dB NF! – so these were scrapped, and several tuned input versions were made. These couldn’t be measured by Mike, because being unboxed, they were picking up very high levels of spurious signal (presumeably from the local comm site), making readings meaningless. Since then, however, we have obtained an HP8970 ourselves, and figures between 0.3 and 0.5dB were obtained, just using surplus devices from spare LNB assemblies. A full report on these will appear as time permits. 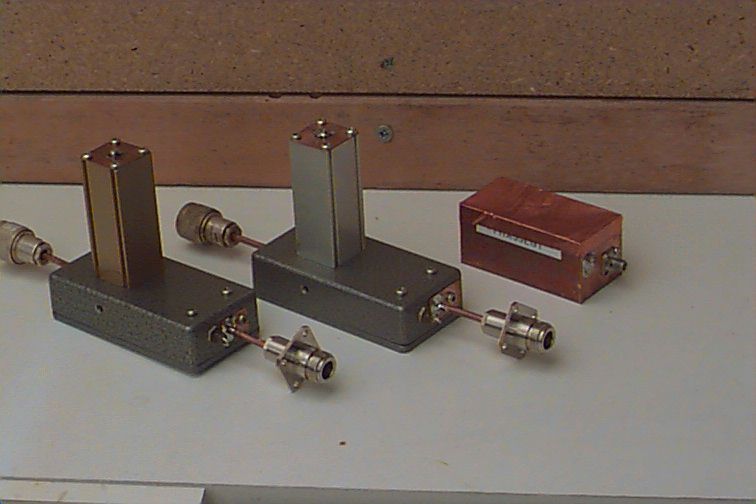