A diode noise source for assessing receiver sensitivity at 1420MHz

Signal generators that cover much beyond 1GHz are very expensive - and will still often suffer from direct radiation. Not a problem where everything is properly boxed up and screened, but really frustrating when trying to adjust the matching of a SETI pre-amp.

The answer to both these problems is a diode noise generator. Output is reasonably constant with temperature, and the level so low that direct radiation certainly will not be high enough (by 10s of dB) to be picked up, even on an open sided pre-amp. For the following circuit, output is about 15dB above thermal noise.

Even if the user cannot calibrate the noise generator, it can still be used to make relative improvements in sensitivity, or to assess the performance of a new equipment. Since the output is effectively 'white noise', it doesn't matter what bandwidth the receiver is, and direct comparisons of noise figures can be made of receivers having different detector bandwidths.

The '20v' could just as well be 18 say - two PP3 batteries supplying this to make a portable version. Where the receiver output is calibrated (say an audio power meter, or converter running into a spectrum analyser), it is quite useful to have an automatic method of keying the noise generator. The following circuit does this - and also uses up some of the two dozen or so samples I have of quad FET 14pin devices.

To remind the user that the unit is still switched on(!), a bleeped LED indicator is provided. For extra usefulness, the LED bleep time is made to be noticeably longer for the onset of noise output (the LED bleeps on both positive and negative edge)

The cycle time is about 2 seconds with these values. 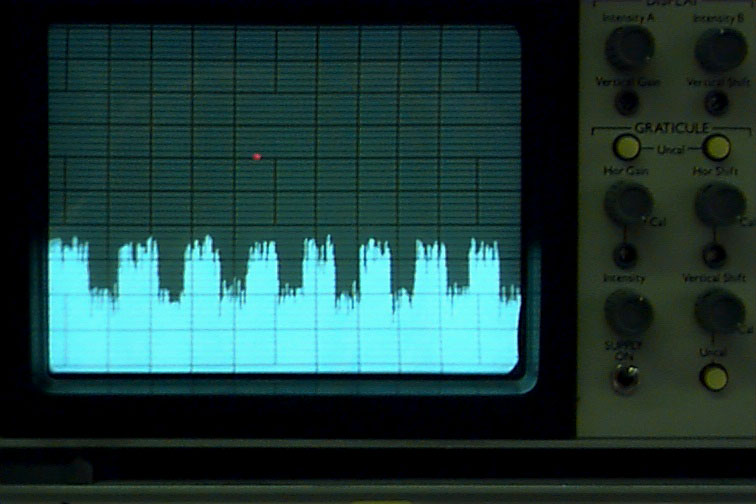 [The noise generator output is a little higher than normal in this case, because the integral output attenuator was not fitted to this sample]