- an alternative strategy for low cost, good quality production of radio equipment suitable for this project

The main SETI league web site contains all the technical and background information necessary to discover what Project Argus is all about, and how one can become a part of it. If this subject is new to you, try the following

This article aims to lay down a strategy whereby the radio receiving equipment can be produced at low cost, but which results in a reasonably high quality solution that is also flexible in how it can be put together and upgraded as circumstances dictate. Use of readily available surplus commercial radio equipment is the key to this approach. A low cost/high quality combination may seem suspicious or unlikely (or both!), but in fact, is just a reflection of where the commercial radio market is positioned today.....read on, and be your own judge.

Although suitable general purpose receivers are to be had that cover 1420MHz directly, it is still more common to see a lower frequency receiver in use fed by a down-converter, and this probably owes much to the amateur radio practice of adding new, more exotic microwave bands by using converters in front of their familiar 144MHz equipment, and amateur band 1296MHz to 144MHz down-converters have been in use for decades, for example. In fact, many of the 1420 to 144MHz SETI down-converters are actually modified 1296MHz designs.

The 144MHz receiver is operating in its single sideband (ssb) mode, because this results in an overall system with straight-forward frequency translation of a window at around 1420MHz to one at audio frequencies (see

link for a more detailed explanation) - this being suitable for the PCs soundcard to accept and act as the PCs interface to the rest of the system The signal processing software running on the PC divides this window down into narrow bins*, and also provides a suitable display and memory driver function.

[* Dividing down the received window into much narrower bandwidths (bins) is a way of increasing the systems effective sensitivity. It tends to assume that any signal we are looking for is stable and unmodulated, remaining constantly on one frequency, at least for the period over which we are processing the data within the window. This being the case, the signal whilst although only appearing within one of the bins, will still be at its previous amplitude, whereas the wideband background noise that is filling the whole receiver window has now been reduced to only that within the bin bandwidth being scrutinised, and will therefor be at an appropriately lower level.)

One drawback to using the 144MHz receiver in its ssb mode is that the upper limit to the translated output will be about 3KHz. (3KHz is traditionally considered the minimum bandwidth necessary to convey the human [male!] voice). If the receiver has good performance, its filtering will very quickly remove signals above this frequency. This is a pity in our application, because the PCs soundcard is able to handle signals up to ten times higher in frequency than this, and the search will therefor be unnecessarily limited. Of course, the receiver can be manually tuned, but to qualify for unattended Project Argus operation, this would need to be automated. Some SETI operators are using a phasing type direct conversion receiver (ie,

the 'R2') to resolve this limited window width problem. With this receiver, the filtering is applied after detection, but prior to the output to the PC, and has been re-worked to increase the window from the familiar 3KHz value to 30KHz.

This really only affects the '144MHz ssb receiver' block above - a front end pre-amp, down-converter and PC with processing software, are still required.

link). They offer the following advantages:

Higher bandwidth - either 7.5KHz or 15KHz, depending on the channel spacing the equipment was designed for.

These equipments range from single channel crystal controlled to multi-channel synthesiser types. It is easy to modify a 7.5KHz bandwidth version to 15KHz, and the filters are readily available at low cost. 30KHz filters are available, but tend to be extremely expensive because they are not used in this market other than for the occasional 'special'. However, the original bandwidths are still several orders of magnitude higher than those in use by unmodified ssb specific receivers.

If the Mobile radio is synthesised, it is still possible to scan 30KHz (or much more) with 15KHz width filters, by channeling the synthesiser for two adjacent 15KHz spaced channels, and controlling the channel select line from modified processing software in the PC, so that the lower half of the 30KHz sweep is done on one channel, and the remaining upper half of the sweep done on the other, the channel being changed by the processing software halfway through the sweep, producing the RH situation of the following two drawings:

Extending this idea by programming up many channels would allow a really wide search window to be achieved, all automated under the control of the PCs processing software which would be changing the channel at the appropriate times throughout the sweep.

If Base Station rather than Mobile equipments are sought, the channel control lines are likely to be already presented on an external connector. These Base Stations will generally also contain a decent size mains power supply and this should be useful for powering other items in the system (after all, power for the associated transmitter is no longer required in our application).

Mention of '144MHz' has deliberately been removed from this drawing, because the choice of frequency is somewhat arbitrary, and will now depend more on what band the mobile radio equipment was originally intended for [Don't forget to take this into account when ordering or building the down-converter].

Choice of channel spacing for programming the receiver may initially seem obvious - for 15KHz width filters, this would seem to imply 15KHz channel spacing!. However, the particular synthesiser step size available may not include this, but it should certainly include a 12.5KHz step size, and this would be quite ok.

Again, putting some figures to this drawing (so lets re-instate 144MHz just for ease of comparison with the earlier example), and assuming 15KHz filters with 12.5KHz channel spacing we could choose the following 16 channels, which would provide an overall 200KHz bandwidth search window: 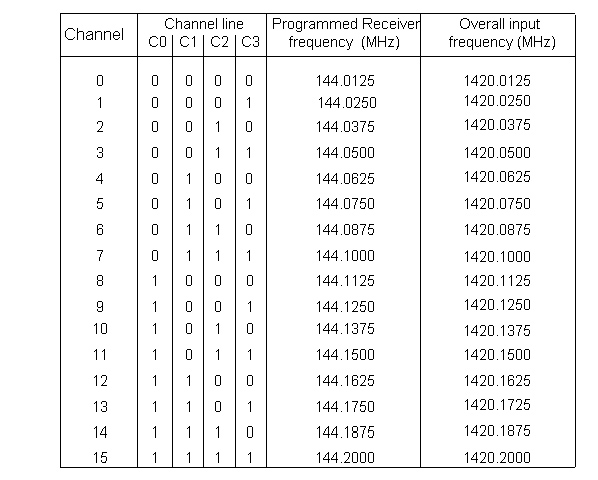 Simoco FR/FX5000 Base Stations. With the synthesised version of this, up to 128 channels are available, extending the search window to a useful 1.6MHz. The modified processing software required to additionally control channel changing is also being investigated.

Down converter for the FR/FX5000 Specific solution

In the previous paragraphs the 1420MHz down-converter was shown as a quite separate item to the rest of the receiver. However, one advantage of the FR/FX5000 range of Base Stations is that they are modular, and in the case of the transmitter, consist of a 1W driver transmitter module followed by a power amplifier module up to the final output power (25 or 50W). Although the power amplifier is of no value here, the transmitter driver (especially the FR5000 non synthesised single channel variant) can be, because it can be used as the major part of a down converter local oscillator chain. With it, a much-simplified down converter, fitted within the Base Station shelf, can be produced - further reducing the overall cost of the receiver equipment. Again, we are looking to produce this as a standard design - see

link for details (or even production link, to show that we really *do* mean business).

Typical response of Down converter/FX5000 Base Station combination

The following picture was taken from a Marconi TF2370 spectrum analyser fed from the audio output of a modified Base Station receiver. Display bandwidth is 50Hz, and the 0.1uV signal is clearly seen some 20dB noise floor. This analyser is also able to display a peak reading from multiple scans (though this photo is of a single scan). This particular receiver was fitted a 15KHz width (ie, 25KHz channel spacing) IF crystal filter.